A cycle accident can happen anytime, any place, anywhere. According to our data almost two thirds of cycle accidents occur at road junctions, with 26% of accidents being caused by a vehicle pulling out from the left either from a side road or on a roundabout.

Car doors being opened into the path of passing cyclists account for 1 in 25 cycle accidents, but the resulting injuries are far more serious with 38% of cyclists suffering broken bones compared to 25% across all other accident types. 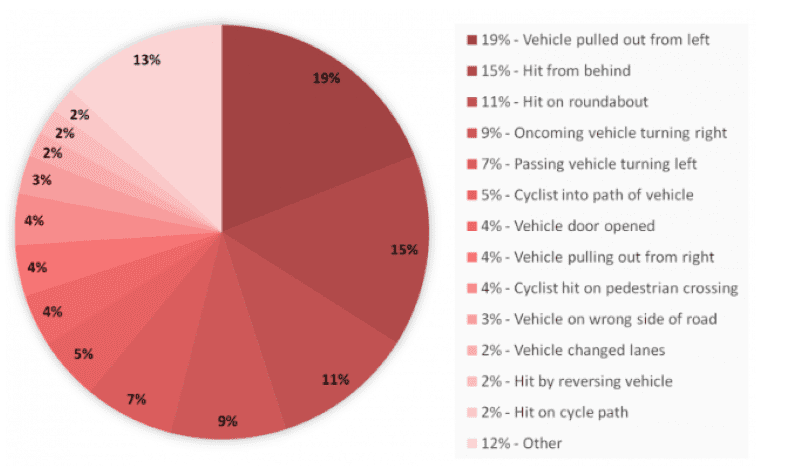 Notwithstanding the risk of imprisonment or a substantial fine, 8% of motorists fail to stop after an accident. This number is surprisingly high and no doubt includes accidents where the vehicle driver did not stop because they were unaware they had caused an accident.

For those cyclists who think they are safe cycling in a cycle lane – think again! Our data shows that 7% of cycling accidents occur when the cyclist is in a cycle lane.

The majority of injuries (53%) are soft tissue injuries, with almost 90% suffering multiple injuries. Again, it is the arms and legs that are the most vulnerable with 54% suffering arm injuries and 67% suffering leg injuries.

Bone fractures, ranging from broken collarbones and shoulders to broken legs and fractured skulls, are common and are reported in 1 in 4 cycle accidents.

In almost all cycle accidents, the rider is knocked to the ground and so it is perhaps expected that fractures to the upper limbs account for almost two-thirds of fracture injuries

The prevalence of head injuries is alarming with 23% of cyclists suffering some type of head or facial injury, and 8% suffering what we would describe as a serious head injury, for example where the victim was knocked unconscious, suffered concussion, sustained a skull fracture or brain damage.

The severity of cycle injuries is reflected is the number of cyclists requiring medical treatment (82%), with 70% receiving hospital treatment

If there isn't a role available for you right now, submit your CV and we'll let you know when the right job comes along!