Home • News • Uncovered: Are bad habits making Brits worse drivers than ever before?

Uncovered: Are bad habits making Brits worse drivers than ever before?

With the UK’s lockdown easing and new driving rules allowing motorists to travel anywhere in the country, the roads are starting to get busier.

In response, TRUE Solicitors has studied government data from the last decade to reveal which is the most common motoring offence for Brits, and if offences are increasing overall? They have also analysed whether we are getting better at driving, and the tips to staying safe as you start to make your way back onto the roads.

What do Brits think are the most common motoring offences?

Brits are worse drivers than they were in 2011

We studied motoring offences data from 2011 to the last recorded date to see whether Brits are getting better, or worse, at driving and the results are in… Brits are worse today. We calculated this by looking at the number of motoring offences and number of cars on the road for an accurate representation.

However, a survey  by YouGov and Swinton found that more than a third of Britons had committed an offence by breaking the speed limit on a motorway (70mph). A quarter admitting to speeding in a built-up area.

Additionally, a sixth of Brits said they had driven to work dangerously in bad weather, suggesting that these reasons could also be behind the increase in motoring offences.

Speeding continues to be the most common motoring offence for Brits

TRUE Solicitors analysed motoring offences over the past eight years – including where motorists were found guilty in court, handed fixed penalty notices and written warnings – and found that speeding continues to be the most common driving offence. Since 2011, the number of speeding offences has increased by an average of 5%  each year to a total of more than 15 million.

Similarly, driving offences related to licence, insurance and record keeping – including driving whilst disqualified, uninsured vehicles, false statements of insurance and fraud and forgery – increased by 6% between 2014 and 2018.

Other common offences for motorists are those that involve neglecting road regulations (other than speeding), failing to supply information to identify the driver and other similar incidents.

Offences relating to dangerous, careless and driving under the influence have continued to decrease by an average of 9% annually.

But which UK city appears to need the most help with their driving?

TRUE Solicitors has dug deeper to analyse the driving habits of Brits, discovering which UK cities are searching the most for ‘driving tips’ – suggesting motorists from the below cities may be nervous about getting back on the road. 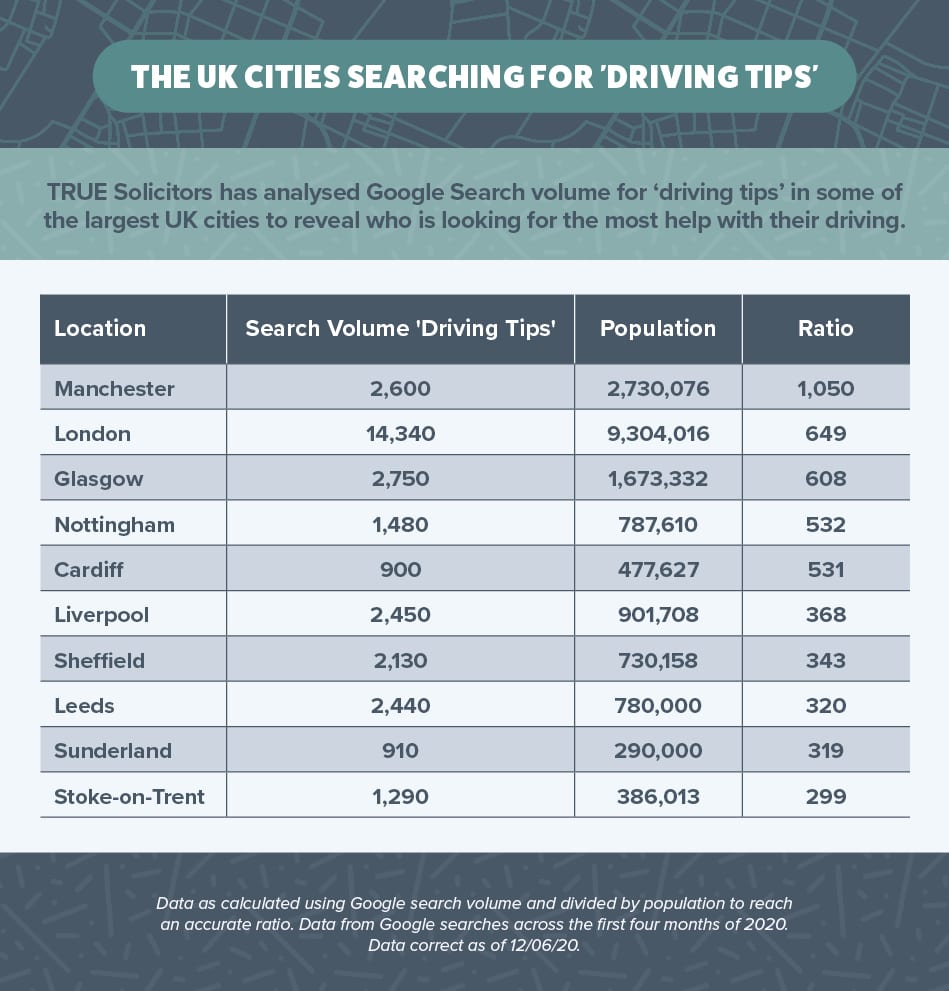 The highest number of searches for ‘driving tips’ (by ratio of population) is from motorists in Manchester, with London, surprisingly, in second. There have been reports  in the past of people turning down jobs to avoid congestion in Manchester, which could be behind the increase in searches.

London also has a reputation as one of the worst cities  for driving in the country, so it is to be expected that the second highest number of searches for ‘driving tips’ is from the capital.

The lowest number of searches for ‘driving tips’ is in Coventry, suggesting that motorists in the city are more prepared for getting back onto the road as the rules change on driving.

In total, however, there has been a 71% decrease in the number of people searching for ‘driving tips’ in the UK, due to the lockdown rules on travelling. But we are likely to see an increase as more cars head onto the road.

How to stay safe on the roads

The last recorded road traffic accidents government statistics (2018) state that there was a total of 160,597  casualties of all severities – the lowest number on record. However, it is still important to take precautions when driving and to ensure you and your passengers stay safe.

You should also keep up to date on road rules to ensure that you do not have an accident.

TRUE Solicitors studied the most up to date government statistics on motor vehicle offences where there were findings of guilt at all courts, fixed penalty notices, and written warnings by findings of type in England and Wales. Number of total offences were rounded up in accordance with government data.

What Does The Stamp Duty Holiday Mean For Home Buyers?

Should I Buy A New Build Property?

Claiming after a brain injury we ask the professionals