Home • News • Revealed: Our Smartphones Are Putting Us At Risk

Revealed: Our Smartphones Are Putting Us At Risk

If your instinct is to reach for your phone when you wake up, you are not the only one.

Research shows that Brits spend a staggering 51 days on their phone each year! In fact, 3 in 5 Brits have even experienced physical pain from continuously looking down at their phone.

But, shockingly, three quarters of Brits wouldn’t give up their phone, even if they caused them pain. TRUE Solicitors have studied what damage our phones are truly doing to our health. 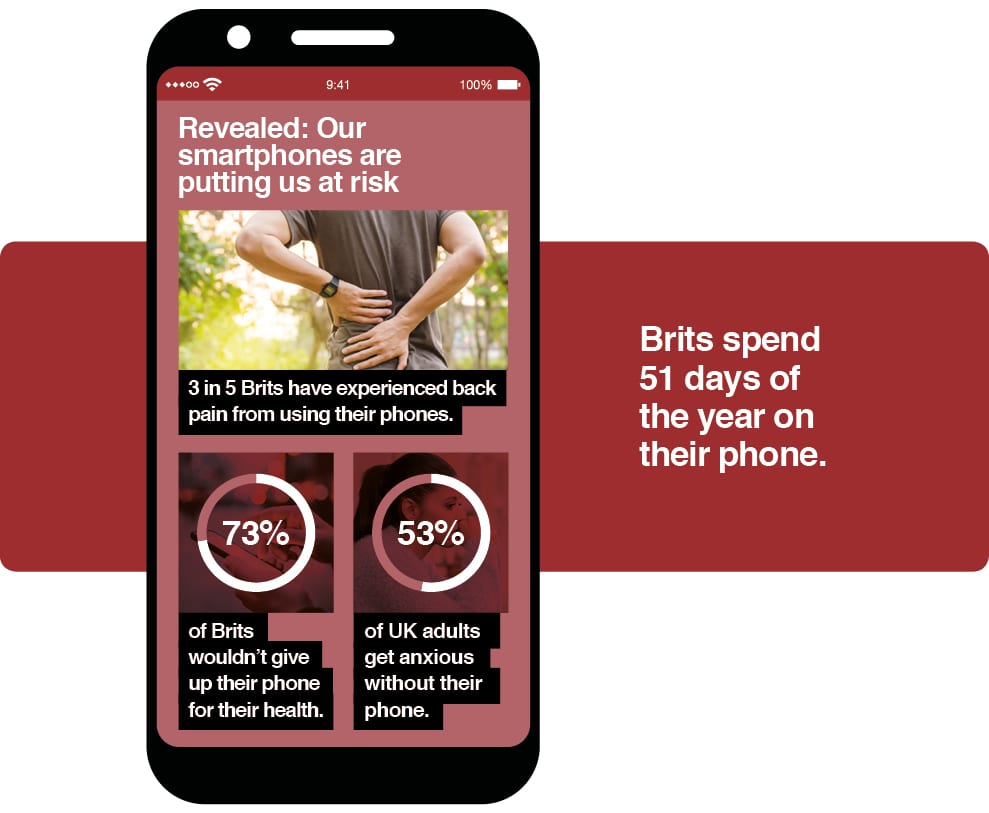 According to the British Chiropractic Association (BCA), 3 in 5 Brits have experienced back and neck pain after using phones, tablets and other devices.

When people are using their phones, they tend to forget about their posture and hunch over, leaving the spine unsupported. The BCA even found that the number of Britons experiencing this type of pain has increased by 9%, to 49%, in the past five years.

Shockingly, however, only 27% would stop using their devices to improve their health.

1 in 2 Britons get anxious when away from their phone

We are so addicted that ‘nomophobia’ – the fear of being without your mobile – is now an ever-growing problem, with 53% of Brits saying they get anxious if they are not near their phone.

Nicki Rodriqguez, 43, owns her own interior design company and admits she struggles without her phone: “I am terrible with my phone but, unfortunately, I run 90% of my business through it. My friends and family do get cross at times with me when my phone is always going off, so I do try hard to switch off. At least until after 5pm until my son goes to sleep at half eight, but it is so hard to do that at times.”

In the past five years, there has been a 25% increase in the number of Brits searching online for help around ‘text neck’, with our phones wreaking havoc on our body posture. Especially, as one in three UK adults admit to checking their phone repeatedly throughout the day.

The average human head weighs 12lbs in an upright position. But when tilted 60 degrees to look at your phone on your lap, that weight can feel up to a staggering 60lbs. The equivalent of carrying four bowling balls on your shoulders while checking your Twitter feed. That’s a lot of pressure on your spine.

This is not just a UK issue. With over five billion people (or a third of the total population) owning mobiles worldwide, we’re only becoming more addicted to our phones.

Globally, we have seen a 58% increase in searches for ‘text neck’, with most searches coming from Singapore. A recent survey by Wee Kim Wee School of Communication and Information even found that over six in 10 young Singaporean adults, between the ages of 21 and 29, had suffered from neck and back pain after using their devices. 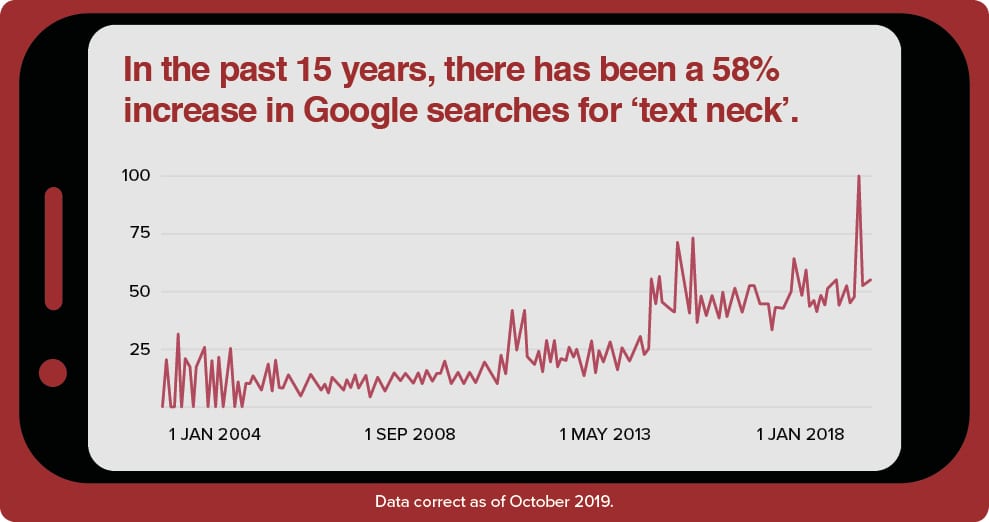 From the moment we wake until getting ready to sleep, our phones are our constant companion. What’s more, the way we are holding our phones could be causing substantial damage to our hands – particularly for the digit that does all of that scrolling.

In the past 15 years, we have seen a 39% increase in the number of worldwide Google searches for ‘texting thumb’ and the symptoms that come from overusing our phones.

Back pain costs the UK economy £12.3 billion annually – the equivalent of the 2018/19 police budget

While Brits don’t want to switch off for fear of missing out, not doing so can significantly affect your future. Today, back pain is the single leading cause of disability. Around the world, there are 540 million people affected at any one time.

Dr. Nikola from medalerthelp.org blames the rise in phone use for these huge numbers: “There is an increase in patients who complain of having strong back and neck pain. The majority of these problems are caused by bad posture due to looking at phones constantly.”

However, it’s not just people that suffer, but the economy too.

In Britain, the costs attributed to lower back pain are £12.3 billion per year. Staggeringly, this is the equivalent of the total UK police budget for 2018/19. Likewise, on average each year, the UK spends around £1.6 billion on treatments to remedy back pain.

In the past year, Brits aged between 25-34 lost 13 working days due to back and neck pain. Typically, we associate back pain with getting older, yet the latest findings suggest back pain is experienced more frequently, and by younger age groups.

This is not surprising, however, when Brits spend an average of three hours and 23 minutes each day looking down at their phone.

Dr. Nikola said: “People usually bend their head forward and stretch and put extra weight on their necks. As a consequence, these muscles tense and cause mild to strong pain.”

Yet, we can help alleviate our back, neck, wrist and thumb pain with a few simple measures.

Put our phones down: Before bed, put your phone out of reach so you are not inclined to check your messages or reach for it first thing in the morning.

Keep moving: While you may want to rest, staying active can actually help with back pain. Inactivity, in some cases, can cause more harm than good, making your muscles tight and stiff and reducing the ability to move as normal.

Try heat or ice: Ice can help to reduce inflammation, and heat can aid in loosening muscles that may be tight.

Find a comfortable position: When you do decide to rest, experiment with positions to ensure you are as comfortable as possible. One position that could help is to lie on your back with your knees bent and pillows under your knees to keep your hips and legs elevated.